Long time ago I bought Slime attack vol. 1. Back then I had no plan with the slime. So I downloaded and installed it. Now some 6 months later I had an idea for a messy render. My first tests was a disappointment. From the promo images I was sure the slime loaded to the character as clothing that follows the movements of the character. instead it loads as props that are parented the hips. So if I move the arm, the hand slime stays in mid air. OK to be fair it's written on the store page that it is 28 props. But still I find it disappointing.

Quality:
The props are good and detailed enough to be any kind of thick liquid.

Textures:
All 8 meterials are good. However glossy and transperent materials aren't a big deal. If you fiddle a little in the Surface tab you ca come up with something similar yourself.

Versatility:
Very low. It is quite a challenge to use the slime in other poses than those in the product. With the small props you limited possibilities to pose different.

Overall:
Had I tested this product shortly after I bought it. I think I would have used Daz3D's return option. Now that returning is no longer an option. I think I'll do a render or two and then forget all about it. 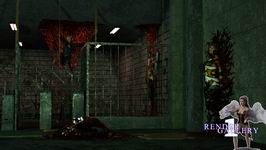