This is an outfit I like. Even though I haven't yet used it in any published render. The outfit is an interpretation of a uniform for a flight attendant. Not only does this outfit include a dress and a pair of shoes. Which in itself could be enough to be an outfit. But this also includes a blazer, a bracelet, ar brooch, a pair of rigged earrings an earphone or a bluetooth headset for a phone, a nice litte hat and a gun.
A flight attendant with a gun? Yes! Of course. You never know when your flight attendant has to fight terrorists.

Quality:
All items in this set has many well shaped details like bends and drapings. the pumps has a modern and plausible design. The gun is a very streamlined version of a gun, or more like a High tech blaster. The earring are a bit spacy, they are shaped as a planet with rings like Saturn. The only thing I don't really like is how the dress is shaped around her neck.

Textures:
The outfit has 4 material options. 2 themed as flight attendants, 1 as a police officer an 1 as a nurse. All materials are very good as they are. But they are also a bit smooth and identical. If one of them had a more cloth or cotton like texture, it would had been nice.

Morphs:
The blazer and dress has a handful of adjustment morphs and the dress has a sitting morph and four wind morphs. Thats fine but a not much and for some reason I've always had problems with sitting morphs.

Versatility:
Most of the item in this outfit could easily be used together with items from other outfits. I can easily think other renders with the hat, the gun or the earpiece.

Overall:
As a real life flight attendant uniform it may be a little too daring with a visible cleavage. But I'm sure many passengers would love to fly with such an airline. And just as many would find it a discrimination and sue the airline. 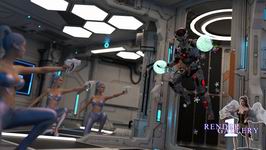